How To Use Scarcity And Urgency To Increase Sales 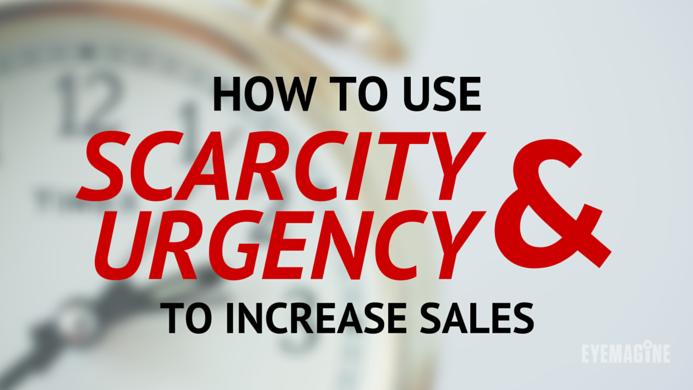 Though it may seem counterintuitive, increasing sales has less to do with concrete metrics such as price point, quality, user experience, and the like, and more to do with an extremely fluid metric you may not have ever considered relevant: psychology.

Psychology is defined as the scientific study of the human mind and its functions, especially those affecting behavior in a given context.

In this case, the given context is the point at which a person has to decide whether or not to purchase a product or service.

Approaching the buying experience from a psychological point of view and studying behavior at the point of sale can provide business owners with valuable insights into one very important thing:

Influencing a customer’s decision-making process to increase the likelihood that they will buy the product or service.

Customer psychology encompasses a vast array of variables (including color, simplicity, and social proof just to name a few) that can have both positive and negative effects on your sales.

Chief amongst those variables, and the ones that can do you the most good, are scarcity and urgency.

But the question then becomes...

“How do I use scarcity and urgency to increase sales?”

Scarcity is the belief that a product or service is about to become unavailable and, therefore, much more valuable.

The interesting thing about scarcity is that it can be created through simple yet subtle means in order to make more sales. Think of it this way:

Scarcity can be any limitation placed on a product or service that puts pressure on the consumer. Psychologically speaking, scarcity generates a fear of missing out that causes people to make the decision to buy.

How does this idea translate to an eCommerce website? With two words and a number:

(X refers to the number available.)

This phrase (and its many permutations) can be a powerful psychological motivator because it shows that whatever this “thing” is, it’s popular and people want it. What’s more, there are only a few left so the consumer better act now if they want to get one before they’re gone.

That brings us to the next psychological tool you can use to increase sales.

When a consumer sees that there are only X left for purchase, they feel like they need to act quickly. That’s urgency. It’s the feeling that whatever is being sold is really important, and therefore, should be purchased immediately.

And just like scarcity, urgency can be created with a few simple words. Consider the following:

The second-to-last bulleted phrase above also incorporates another way urgency can be created: word choice. “Act now before the December 5th deadline!” encourages the consumer to not just act, but to act NOW. Words such as the aforementioned ‘now’, ‘hurry’, ‘immediately’, and ‘instantly’ (just to name a few) tell consumers to do something right away; don’t wait another minute or you’ll miss out.

Put them together and what have you got?

To this point, we’ve considered scarcity and urgency separately. On their own, either can be a powerful tool to increase sales. But imagine the potential if you used them together. Couple the phrase, “Sale ends January 2nd.” with a counter that states, “Only 8 left.” and you’ve got a recipe for sales success. You’ve just created both scarcity and a sense of urgency. You’ve hit the consumer with psychological combination that can be very difficult to resist.

A consumer was considering a particular specialized app. She already had another app that she had been using for a long time but she had heard good things about this other app. She had researched this other app but had held off buying it because she wasn’t sure that she would actually use it since the old app would do pretty much the same thing.

Then one evening, she was surfing a completely unrelated website (let’s say it was a science and technology site) and ran across an ad for the other app. This ad had three things going for it:

Our heroine then did something she had never done before: She immediately purchased this specialized app.

Before you cry, “Fiction!”, be assured that this did happen. The woman in question had been contemplating purchase of the specialized app for quite some time but the combination of urgency and scarcity (as well as the significant discount to be sure) moved her to do something she doesn’t usually do: act on impulse and emotion. That’s the power of these psychological tools.

At a certain point in all businesses, sales (and their increase) becomes more about psychology than about business or economics. Scarcity and urgency are powerful psychological variables that you can use to good effect to drive traffic and increase sales. Use them wisely and good luck.

Let's get down to business.